Learn more about specific areas you can restrict your tax-deductible contribution towards. Make your donation online or learn about other ways to give.

Jerry L. Kennedy Aviation Career Advancement Scholarship - The family and friends of Jerry L. Kennedy established this scholarship in his name to recognize the outstanding contributions Jerry made during his ten-year involvement in SIUC’s Aviation programs. Starting as a student pilot and working through the ranks as a Flight Instructor, Charter Pilot and Flying Saluki Team Coach, Jerry displayed the highest levels of professionalism and commitment to aviation. His love of flying and people helped make the dream of an aviation career possible for many. The Jerry L. Kennedy Aviation Career Advancement Scholarship was established to encourage others to reach the highest level of achievement in their pursuit of an aviation career. It is bestowed upon those who demonstrate a commitment and devotion to aviation in the tradition of Jerry L. Kennedy.

LuAnn Gatewood and Gina Gatewood Trover Memorial Scholarship - This scholarship was established to honor LuAnn Gatewood, a former flight instructor in the SIU Aviation Flight program, and her sister, Gina Gatewood Trover. It was established to assist students who are currently enrolled and pursuing advanced training in the SIU Aviation Flight program.

James and Helen Newby Aviation Scholarship - Captain Ed Newby attended SIUC from 1962–1966. In 1964, he had the opportunity to witness the beginning of the SIUC Aviation Program. Although he had obtained his flight ratings prior to the program’s inception, he has fond memories of learning to fly here at the university. He went on to a 37-year career with American Airlines, retiring as a Captain on the Boeing 777. Captain Newby and his wife, Doris, have established this scholarship to honor his father and mother, James and Helen Newby, for their encouragement to follow my dream, for their financial sacrifices, and, most of all for their undying love to all their children. Additionally, he wanted to honor the university that was so influential in providing him with the education, both flight and academic, that gave him a start on his aviation career.

Ryan McShane Hope FLYS Scholarship - This scholarship is dedicated to recognizing students with a strong involvement in or commitment to overcoming adversity. The scholarship’s namesake, Ryan McShane, is a successful aviator and fighting every day to overcome Stage 4 colon cancer. Instead of giving up, Ryan has charged forward using a positive attitude to beat this life-threatening disease. All he asks is for his story to inspire others.

Matthew K. Meier Faith Family Friendship Fortitude Future Aviation Management Scholarship - This scholarship was established to honor the memory of Matthew K. Meier, a May 1992 graduate of the Aviation Management program at Southern Illinois University Carbondale. Matt began his aviation career with United Express working ramp and customer service jobs and then moved on to the Routing and Scheduling Department at United Airlines. Matt passed away in September 1996 from a rare form of cancer. Matt is remembered by his fellow students, Saluki Football players and co-workers at United Airlines as hard-working, dedicated, fun-loving and kind. Matt’s personal philosophy is embodied in a creed that he lived by: Faith, Family, Friendship, Fortitude, Future. This scholarship will be awarded to those who embody this creed as well as Matt’s love for aviation and the airline industry.

Herbert H. Howell Memorial Aviation Management Scholarship - To honor Mr. Howell’s substantial contributions to the aviation field (particularly related to airport management and planning), an endowment fund was established at SIUC in his memory in April 1982.

Michael R. Peters Aviation Interviews.com Aviation Scholarship - Mr. Peters attended SIU as an Aviation Flight/Management student from 1996-1999, and realized there are a lot of hard-working students in flight training that are held back due to the lack of financial aid. After attending an AMS banquet, he decided that he would give back someday if he was able to. Mr. Peters served as a flight instructor for four semesters while at SIU and graduated in December of 1999. After graduation, he instructed for another six months and was hired by Continental Express (now ExpressJet / ASA). He started AviationInterviews.com in an effort to share interview experiences with pilots around the world. It all started with four original members and ten interview experiences. Now the site has over 88,000 members, 5,000 study guide questions and 8,000 different interview experiences! Mr. Peters thanks all of the gracious members of AviationInterviews.com for donating their time and money to keep the web site running, and making this scholarship possible!

Victor Davis Memorial Aviation Scholarship - Victor Davis was the President of the Black Aviation Association, a registered student organization at Southern Illinois University Carbondale, at the time of his death in 1993. Victor’s lifelong dream was to earn his Federal Aviation Administration flight certificates and then fly for a major airline. Victor was in the process of completing his commercial pilot certificate at SIUC with an instrument rating when he passed away. The goal of the Victor Davis Memorial Aviation Scholarship is to help aviation flight and/or aviation management students at SIUC with their educational costs.

Joseph A. Messina II Aviation Explorers Scholarship for Aviation Students - This fund was established in honor of longtime aviator and Explorer’s Post Founder Joseph A. Messina II by former Air Explorers and other friends of Mr. Messina. In 1970, while he was a Captain for United Airlines, he founded the Air Explorers to help young people interested in aviation. An airplane, a 1946 Aeronca 7-AC Champion, was purchased by the original 18 members. Mr. Messina asked fellow United Airlines pilots and other aviation professionals with flight instructor ratings to volunteer to teach the members to fly. Today, many former members continue to fly as private and professional pilots, as well as work in other sectors. The intent of this fund is to award a scholarship to any student in need of financial aid seeking a career in aviation (not restricted to any one phase of aviation, or any aviation major), but with first priority to those wishing to become pilots.

George J. Priester Memorial Scholarship - This scholarship was established to honor the memory of George J. Priester, a true Aviation pioneer. Mr. Priester became an instrument instructor pilot in 1938 for the War Training Service. Eventually he trained over 700 pilots for the Civil Aviation Administration licenses and more than 1,000 pilots for the FAA. After the war, Mr. Priester founded Priester Aviation. In addition, he was the owner and operator of Palwaukee Airport in Wheeling, Illinois from 1953–1986. It was the second busiest airport in the state of Illinois during the 1960's, 70's and 80's and the busiest privately owned airport in the world. Mr. Priester passed away in 2006, but he left a strong legacy behind. His family has continued to be leaders in the aviation industry.

C. Gene and Robbi Seibert Aviation Management Scholarship - This scholarship was established in memory of C. Gene and Robbi Seibert. Gene Seibert was one of the co-founders of the aviation programs at SIUC. In order to honor Gene's memory, the scholarship will be awarded to student(s) who express an interest in working in such fields as airport management, fixed base operator management or aircraft product support management, which are all fields within Mr. Seibert worked during his career in aviation. Robbi Seibert was also involved in aviation. She met Gene while working at SIUC Air Institute & Service at S.I. Airport. Robbi was a SIUC B.S. in Aviation Management graduate, class of 1985.

Ray Plote Aviation Scholarship - This scholarship was established to honor Ray Plote, a businessman, construction contractor, and aviation enthusiast. Mr. Plote has had a long and successful business and construction career in which aviation has played an important role. In addition, Mr. Plote, through the encouragement of several of his neighbors, has generously given his support to establish the SIUC Aviation Golf Scramble which is held annually at the Boulder Ridge Country Club where he resides.

Bill Garton Memorial Aviation Scholarship - Mr. Garton was a proud member of the Aviation Flight Program faculty at Southern Illinois University Carbondale and an enthusiastic promoter of aviation as a career and avocation. This scholarship was established to provide financial assistance to young men and women whose lives include aviation as a major theme.

Larry B. Byerly Memorial Aviation Scholarship - This scholarship was established by family members to honor the life and career of Larry Byerly. Larry grew up in the family owned aviation business which his father, R. Millard Byerly started on the old grass Mount Hawley Airport in Peoria, Illinois over seven decades ago. Larry was the former President and Co-owner of Byerly Aviation, Inc. He was a respected member of the aviation community around the world. In addition, his employees were of the utmost importance to him and Larry always considered his employees family. Hundreds of young men and women started their aviation careers at Byerly Aviation. He was one of the founders of the Illinois Aviation Trades Association and served on the Aviation Management and Flight Advisory Committee at Southern Illinois University. In recognition of his lifetime devotion to aviation, Larry was inducted into the Illinois Aviation Hall of Fame in 2003. Larry's family and friends hope to support students who share the passion Larry had for aviation.

Steven Staples Memorial Aviation Scholarship - This scholarship was established in memory of Steven Allen Staples. During his days at SIU, Steven was a key member of the National Champion Flying Saluki Precision Flight Team and worked at the Southern Illinois Airport for Line Service. Steven was hired right out of college with Pan American Airways. During his airline career he was type rated and flew the line on various aircraft including Boeing 727, 737, 747-400, 757, 767 and the Lockheed L1011. Steven’s success is attributed to his character. He was kind, always smiled and would help his fellow aviators through his leadership as an elected member of the Airline Pilots Association.

Esther Noffke Memorial Aviation Scholarship - This fund is established to honor the memory of Esther Emma Rose Noffke and her contributions to aviation education. During World War II, Ms. Noffke joined the “WASP” Women Airforce Service Pilots, and was assigned to the 318th AAF Flying Detachment in Sweetwater, TX. Ns. Noffke was one of just over 1000 women selected for the WASPs out of more than 25,000 applicants. Her pioneering spirit and dedicated service will long be remembered and appreciated by new generations of aviation students.

Dr. David A. NewMyer Scholarship - This fund was established by the SIU Aviation Captains Club to honor the leadership of Dr. David A. NewMyer. Dr. NewMyer began his long and illustrious career with SIU in 1975. He has devoted his life to the field of Education and has trained thousands of aviation professionals. His influence is seen worldwide. The SIU Aviation programs are nationally recognized as some of the nation’s best. These programs have been blessed with outstanding visionary leaders who have taken these programs to new heights. These programs have flourished under Dr. NewMyer’s leadership. He is a true pioneer of the program. 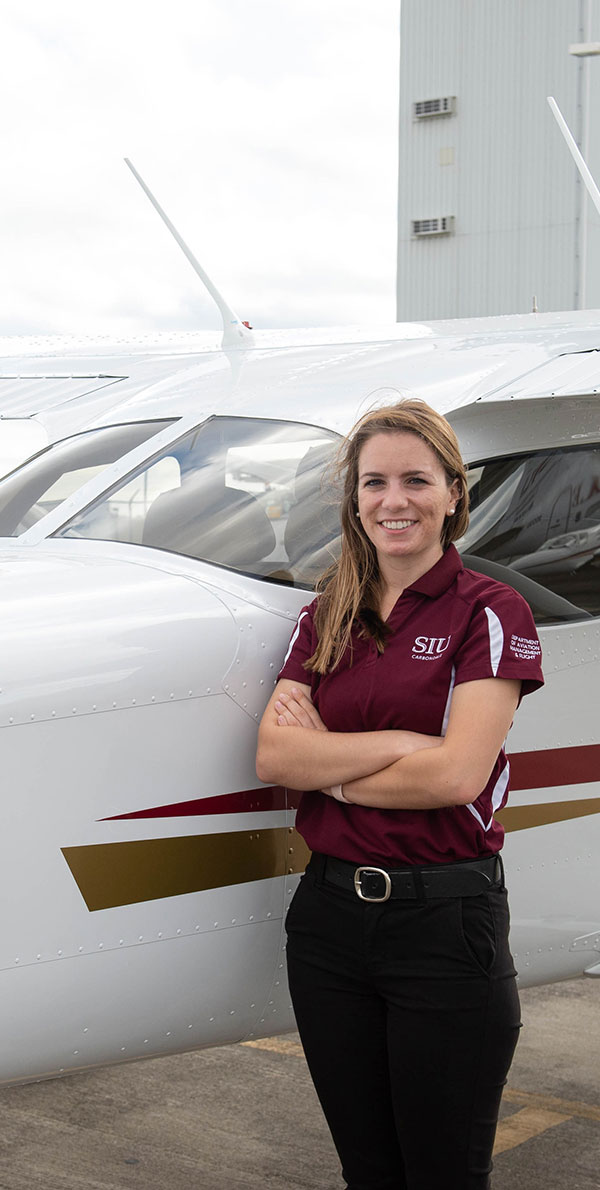